Blog  >  Three Words Everyone with Mental Illness Should Learn

Three Words Everyone with Mental Illness Should Learn 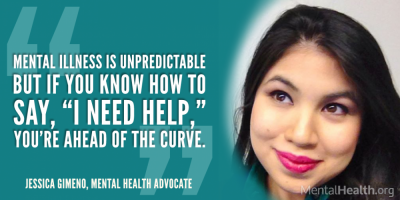 “I need help.”  Those are three of the hardest words to say. Learning how to say them and being brave enough to seek help are necessary for surviving mental illness and life itself.

In our insta-everything culture, it's getting harder to have authentic conversations.  Cries for help that are better said over the phone are now reduced to posts on Facebook and Twitter that get overlooked in peoples’ newsfeeds.  And conversations that are better had in person are now sent via text messages.  There are even apps that exist to help you break up on your smartphone!  Calling a friend and saying, “I'm depressed.  Can you come over?” means being vulnerable.  What if your friend laughs, dismisses you, or calls you weak?

I might not be alive today if I didn’t accept that I need help and push past ignorance, rejection, and cultural barriers.

Throughout my teen years, I asked adults in my life for help with recurring depression but was told, “This is just teenage angst.”  I heard things like, “if you just prayed more or tried harder, you wouldn’t be depressed.”

Young people are often told we're too immature to understand pain.  But I refused to be silenced.  Instead, I cried louder.  My turning point came when I was 18 years old and my friend Dina, who was diagnosed with bipolar disorder, committed suicide.

Because of her death, I researched the illness and realized I had many of the symptoms. I finally knew why Dina was the only one who understood me: because it seemed we had the same mental health problems.

On my own, I saw the campus psychiatrist at my college who diagnosed me with bipolar II, which is defined by a pattern of low, depressive episodes and high, hypomanic episodes.  I also sought a second opinion, which confirmed the diagnosis.  The diagnosis was a relief after years of fighting a nameless, faceless enemy.  I realized asking for help is not a sign of weakness; it is a sign of strength.

But my college experience was not easy.  In fact, I got a D+ on my first midterm!  The exam happened during one of my depressive episodes.   Depression can make it hard to concentrate.

Thankfully, over time, I learned to identify symptoms of depression and be proactive so I could see my therapist, call a friend, and ask for accommodations (ex: getting an extension on a paper as I started to feel depressed instead of waiting until it was due).

Asking for help decreased the frequency and length of my mood swings.

Beyond mental illness, admitting we need help is necessary for surviving life’s other trials.  When I was 19 years old, I was diagnosed with polycystic ovarian syndrome (PCOS).  Later, when I was 24 years old, I was diagnosed with myasthenia gravis (MG), a neuromuscular autoimmune disease.  Living with PCOS and MG is an everyday battle.  MG affects most parts of my body and I carry a cane because of it.  It can be hard to call a friend when I'm stressed out and ask if he/she has time to talk but I do it anyway.  The truth is mental illness is unpredictable and LIFE is too.  Life throws curveballs at everyone.  But if you know how to say, “I need help,” you’re ahead of the curve.

Jessica Gimeno is a health activist who believes in surviving illness with style and a sense of humor.  Visit her blog, Fashionably ill: The Sick Woman’s Stylist and follow her on Twitter @JessicaGimeno.

Stress No More: Simple Tips to Improve Your Health by Reducing Stress

Support for Colleges to Assess and Enhance Mental Health Programming

Why You Should Care About Mental Health

Making Your Community More Resilient in the Face of Disasters